1/08/09
upton warren
decided to go straight to the east(lapwing) hide at the moors as a little egret had been frequenting the area in front of the hide.on entering the hide i saw the baby oystercatchers and seen how they had gone from hte cute baby look to the agressive teenager look,they did look a bit ragged,the 2 young and 2 adults were on the edges of the east islands(still overgrown at this point).but on looking for the egret there was no sign.i scanned around the islands noting the usual birds(lapwing,b h gull,common tern,after about an hour in the hide and with still no sign of the egret,i was getting restless,will this be another dip for me.
like the hell it was.... 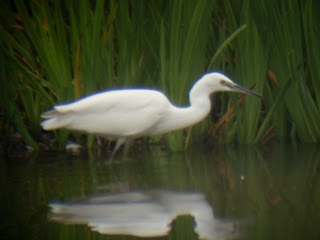 ...aftertching a common tern flying close to the hide i put my bins down and saw a bird flying in from the north moors area(but looked more like the paddock-moors houses area).it was the egret!! (lifer)
i quickly called it out to another person in the hide and my dad,both managed to get onto it(but my dad had to wat untill it landed as he was looking in the wrong area).it flew quite close the the hide and landed on the front edge of the east islands,giving stunning views,or what i thought was stunning views.over the next hour or so,it got closer and closer and eventually walked onto the OYC cage island.i got many photos and films while watching it and managed to capture some good behaviour.in this video watch how the egret slants its head so it can judge the depth/distance of a fish: 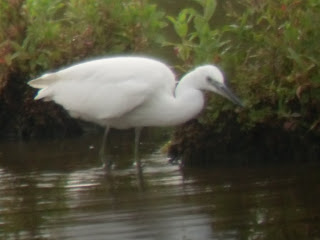 the egret flew over towards the south west marsh and was lost to view,we then moved to the west hide and got distant views of it from there,and guess where it was right in front of the hide on the opposite side.despite hopeing for a water rail or bittern neither shown.another 3 OYC flew in boosting the total up to 7 birds.highlights here:

getting out the car at the sp car park i saw movement in the bushes on the pool edge.after a brief look i noted there was 3 whitethroat and 5 reed warbler.i used up so much battery on my camera on the egret that i only had time to film a common sand and a green sand.a water rail was watched on the bank between the second and 3rd flash.an OYC from the moors had moved down here to have a rest,9 green sands were giving good views in front of the hide and there was also 2 common sand(but 3 were seen).36 curlew came in to roost,as did 200c lapwing and 500+ b h gull,23 common tern were noted on the flashes/sailing pool at dusk.as with mostrecent visits there was big nombers of stock dove we counted 10+ with them comming and going all the time

28/07/09
yes im being very boring with the names but,that what was with sheepwash,lots of terns,today there were 16 but little else.and we noticed 2 of the terns were ringed 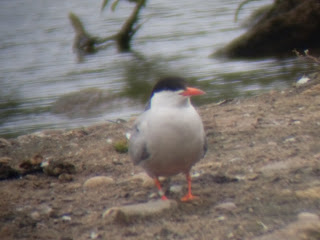 .
very little else was around jus the usuall stuff mentioned over the last 2 posts,highlights were:
3 little grebe(1juv)
16 common tern
2 kingfisher
8c reed warbler
15c chiffchaff
3 bullfinch
and a few pics/videos from the day:
incoming!!!! 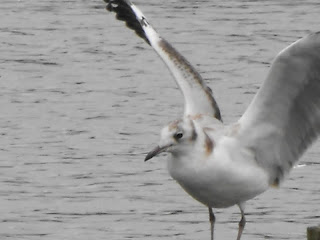 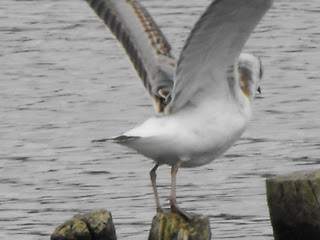 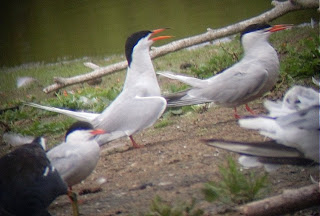 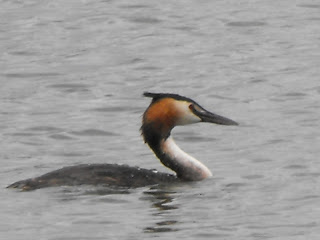 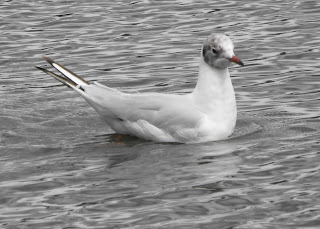 Posted by midlands birder at 13:22 No comments:

23/07/09
it was back to sheepwash today(just go with it) to see if the dunlin,common sand,arctic terns or the huge flock of common terns were still around.out of these mentioned only the common tern flock remained with 17 birds and were still giving amazing views.,the usual bird were around when walking around to the island(now unofficailly called dunlin island in my book).a sedge warbler was singing in the reeds at the small fishing pool,but never shown(would be a lifer for my friend,one of his bogey birds).a male reed bunting shown in bushes next to the river for
a few seconds.at the island we sat down and watched the terns flyng into the island and over the lake,after about 5 mins of watching a wader appeared from behind a bush,running very fast and without bins i thought it could have been 'our'dunlin.after getting onto the bird with my bins though it was an obvious plover,so ringed or little ringed,as my friend had only experience with ringed(and limited experiance with that),so he let me get down to my magic.after a worrying long time i said it was a juv little ringed plover,a lifer for my friend(and my 100th little ringed this year).but now as i write this,i dont believe it to be a juv,but a winter plumaged adult,anybody got comments on this it would be apriciated.but you cant blame me,its a plumage you dont often get to see in britain 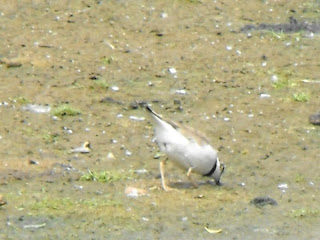 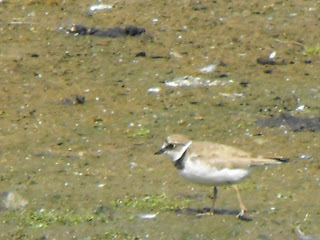 apart from this and the terns it was quiet,compared to the last visit.a adult little grebe was feeding 1 young from the raised path and showing well but as usual they dive a lot 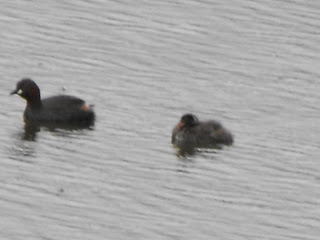 i know of 1 local place where you can get very close,prolonged views of little grebe and all you have to do is stand or sit there in plain view,no camo clothing just a t-shirt or whatever all you people wear.this place is the bag pool at baggeridge cp.and if you get bored with amazing views of the little grebes.you can search the woods for the lesser spotted woodpecker which are there(ive seen 2 there).back to sheepwash.the mute swan family was still around and were being ery posey.
next katy price/jordan anyone?? 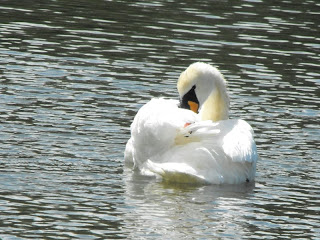 who's the best sandpiper id

having had a recent lack of posting i have devided to catch up with myself and to start this posting surge with a quiz,about sandpipers.well wood sandpiper and green sandpiper.i will post 4 images and you can answer which are green and which are wood,simple,good luck!!!
(note all pics taken by me and so are crap quality)
1. 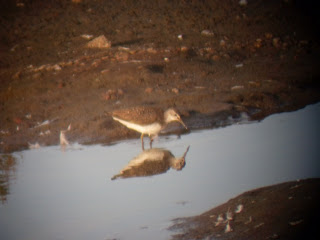 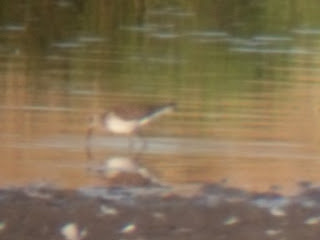 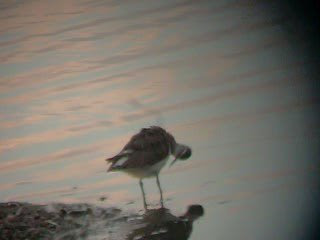 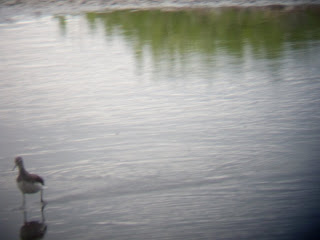 18/07/09
weve had wader-fest,now its tern fest.
sheepwash
ariving from the main entrance we started walking towards the lake.a few pigeon were on the field but a bit distant.looking through my bins i could pick up 2 stock doves.walking slowly towards them with my friend camera.i got this shot,before hearing an exited yell from my friend that he'd just seen a slow worm.i joged over and he said it had dissapeared,but as it went into dense undergrowth,and i had a huge earge to get to the lake to see if the 2 common terns were still here.a quick check of the small fishing pool got us 4 reed warbler and a whitethroat. 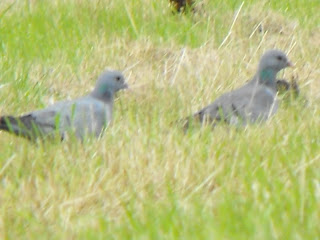 then over the wooden bridge thing(not really a bridge just a few planks of wood).then down the gravel bank to the waters edge to view the rocks.nearry fall flat on my face but managed to stand up.then looked over the lake and...god damm

thats a lot of terns,at this point i counted 16 commons in the air and i had a shout from my friend calling arctic,but on getting onto the bird he said was an arctic it was a deffo common tern.
after my friend taking some pics,we resumed our walk,next stop the scrape island.my friend fell behind but when i got over to the island i imediatly saw a wader scuttle away to the opposite water edge,just out of view.i quickly called my friend and again used his camera(my camera doesent have much zoom and i need my scope to take close pics).we waited a few minuites before his head popped out and i got a pic:
(stop press,1st pic) 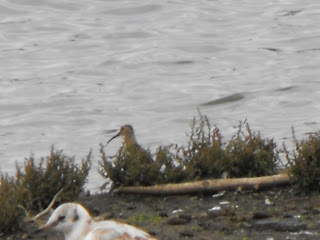 than it ducked down again and we had to wait again.after another few minuites he came out and shown himself to be a summer male of the 'schinzii' race.he gave a good op to get some good photos: 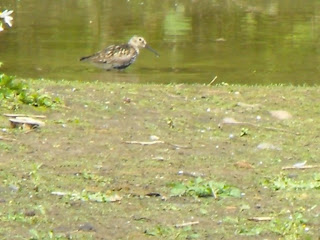 then giving my friend his camera back i turned my attention to the terns.there were 19 terns flying and 4 landed on the island.looking through the terns i picked up 2 odd ones with longer tail stremers flying together.they looked darker than the commons and had a plainer outer primarys or 'hand'. the underwing it was a pale white/grey,with all the primarys been translucent with a thin blck line on the trailing edge of 'hand'.they were too distant to see anything other than the red bill(too far to tell for the black tip).at this point we were thinking arctic,by the compact structure and basic shape.after a few minuites of watching them they suddenly came in closer and lookind as if they were landing on the island but at the last second a woodpigeon flew through and flushed all the terns,but in the time they were closer i noted the all red bill which was noticably shorter than the acompanying commons.at this point we were confident enough to put the news out as 2 adult arctic terns(we had give the dunlin news out earlier).after a good hour watching the terns and dunlin we decided to walk on to see if we could find anything else.not a long way up the path we flushed 2 birds from the bank,that flew off so quickly,these later turned out to be 2 common sands,they flew off so quick i didnt have time to note the wing bars.at first i was sure we had green sands,by the lack(or what i thought) of the wing bars,they flew some distnce to the 'doulder island and couldent be refound.on a quick check of the chemical pool we had a lesser whitethroat near the path along the railway line.we walked back to the dunlin,who was still there and showing well but there was only 16 common terns left and no artics.not long after this a common sand flew on the island and i managed to get one pic,which i am not wlling to show(but its on birdfourum).highlights are:
3 little grebe
1 ruddy duck
1 dunlin
2 common sand
21 common tern
2 arctic tern
2 stock dove
2 sand martin
1 lesser whitethroat
1 whitethroat
6 reed warbler
1 bullfinch(female)
aftermath:
the arctic terns were again reported presant at 6pm that night.not a bad day i think.
MB
Posted by midlands birder at 12:14 14 comments: 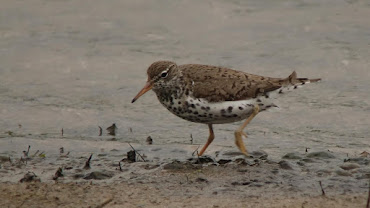 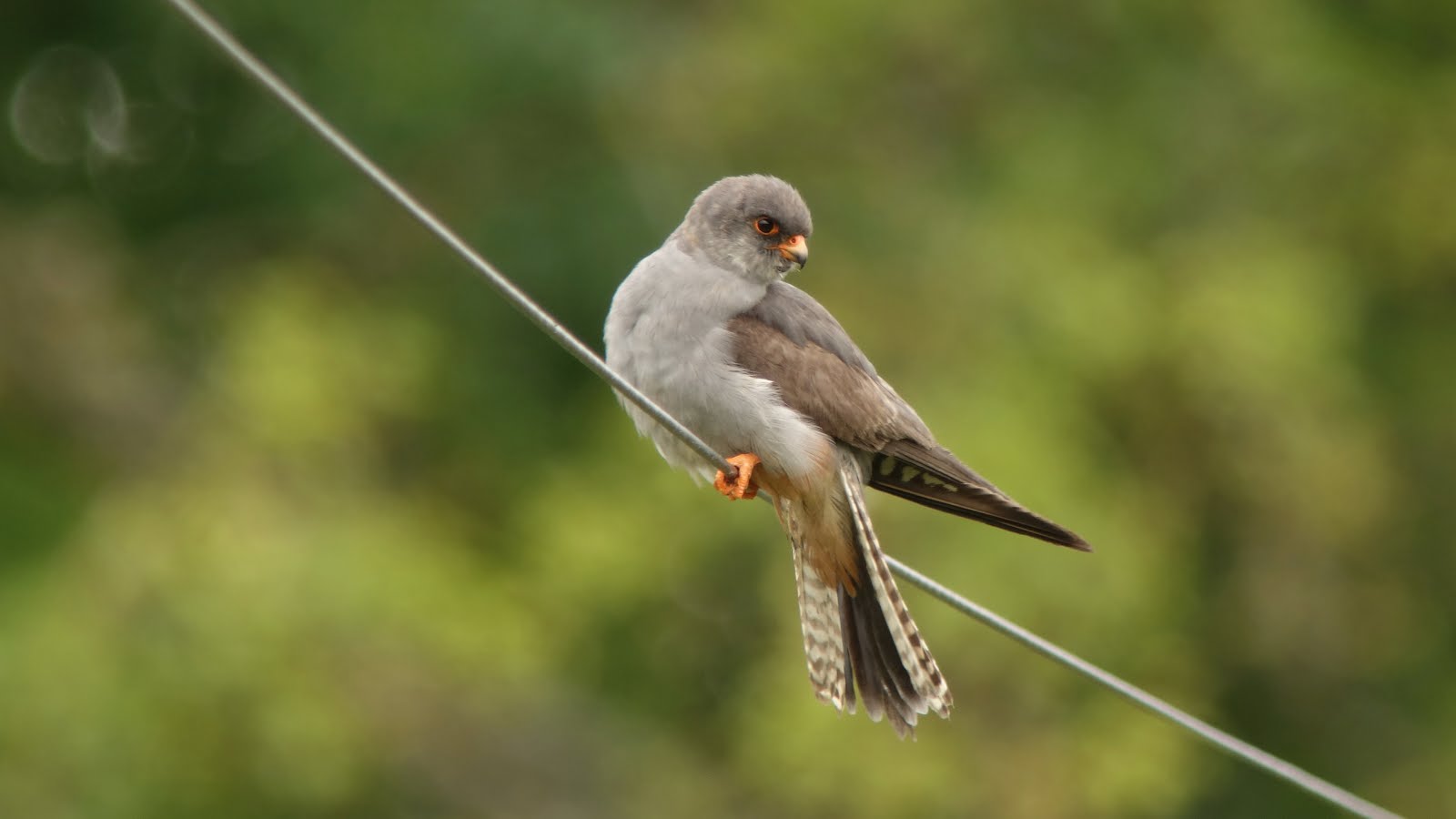 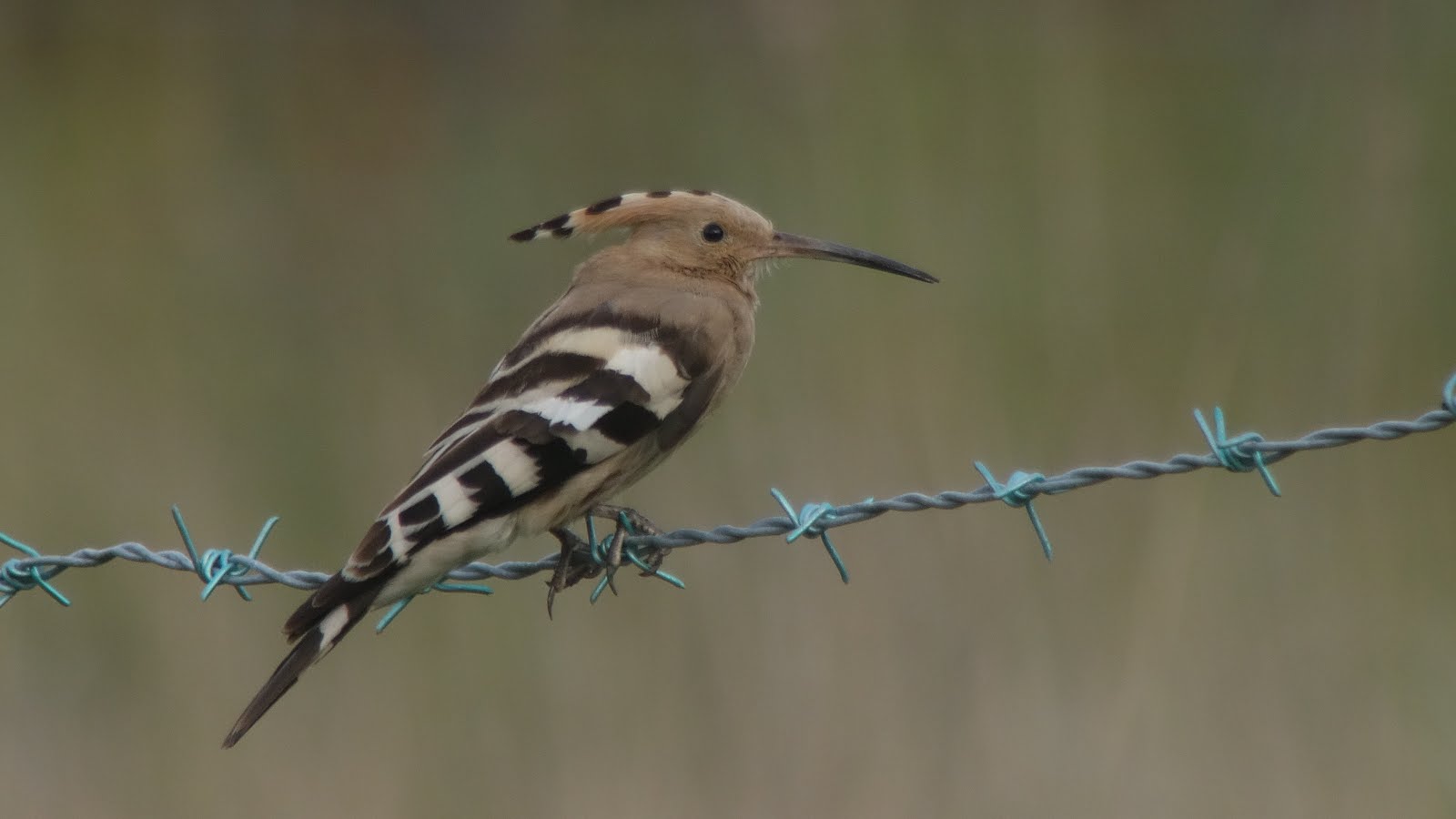 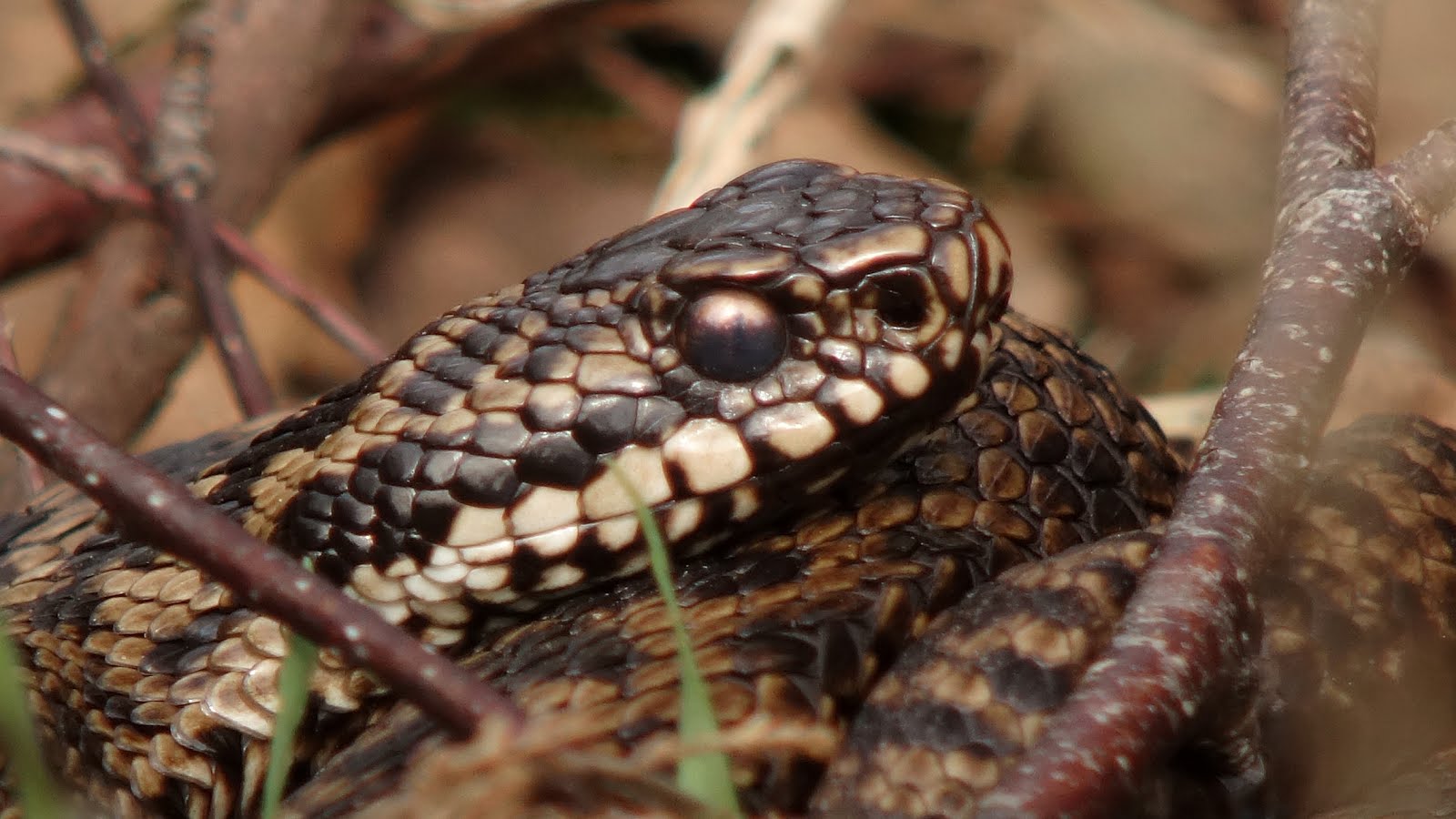 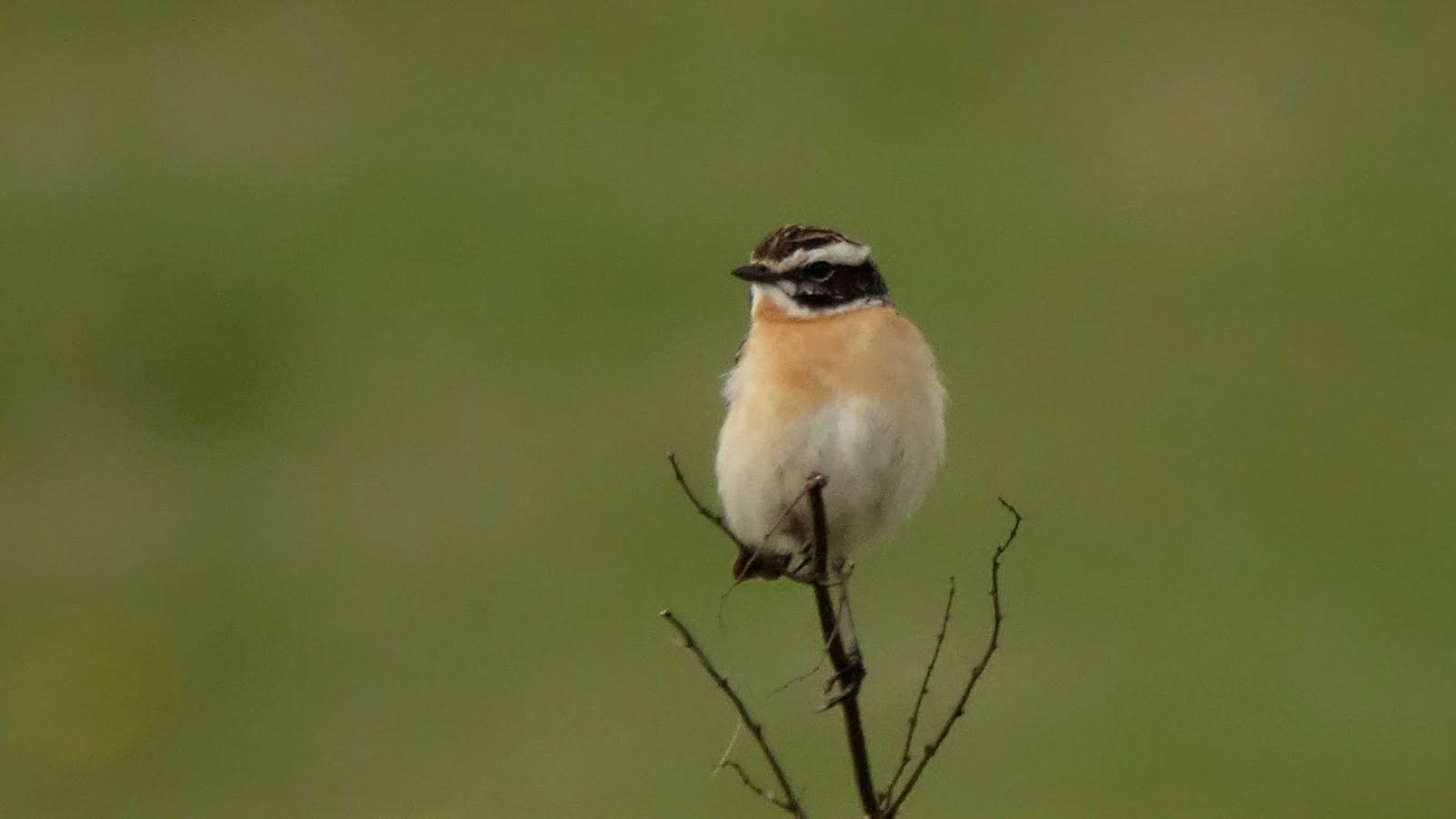 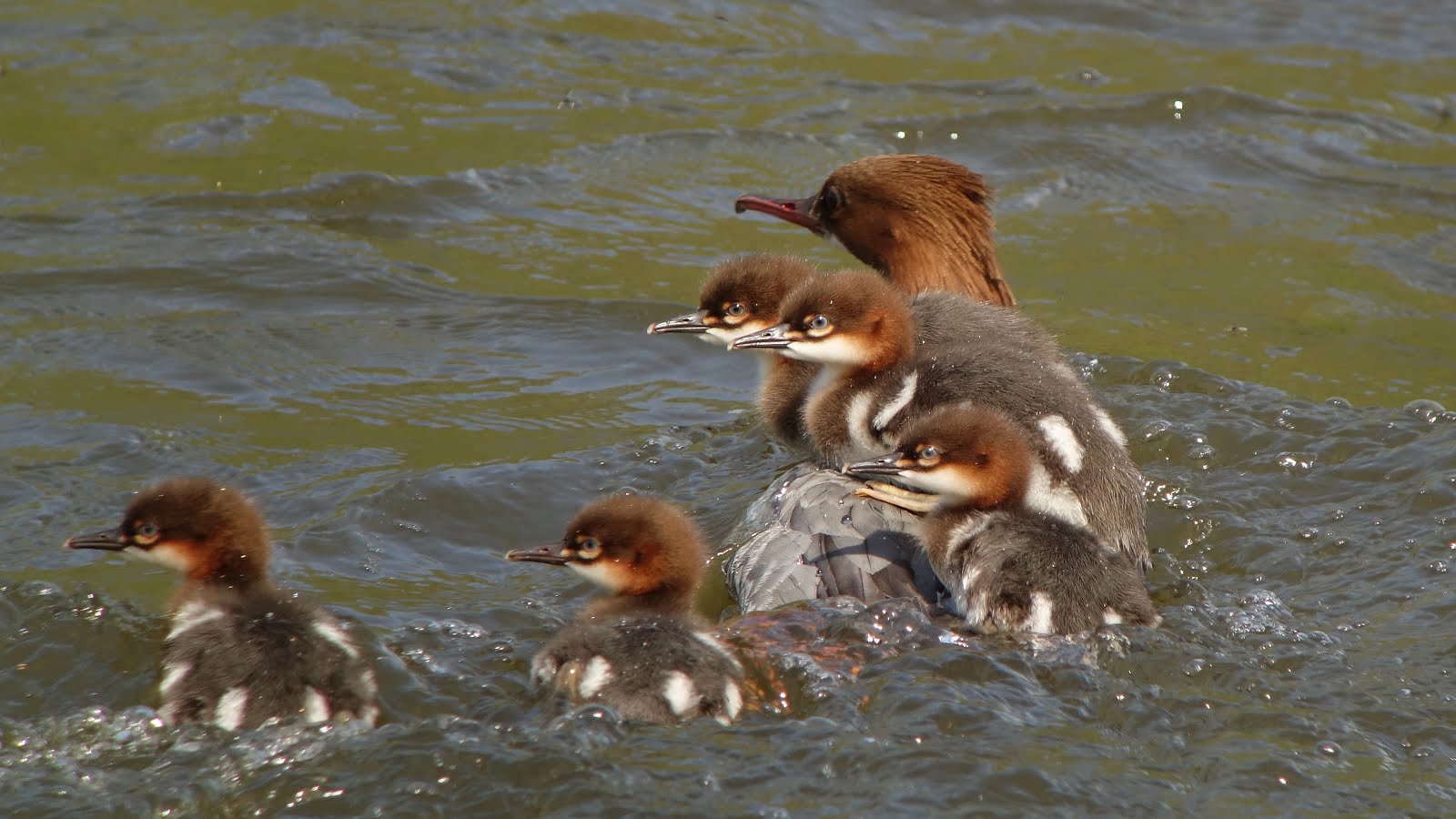 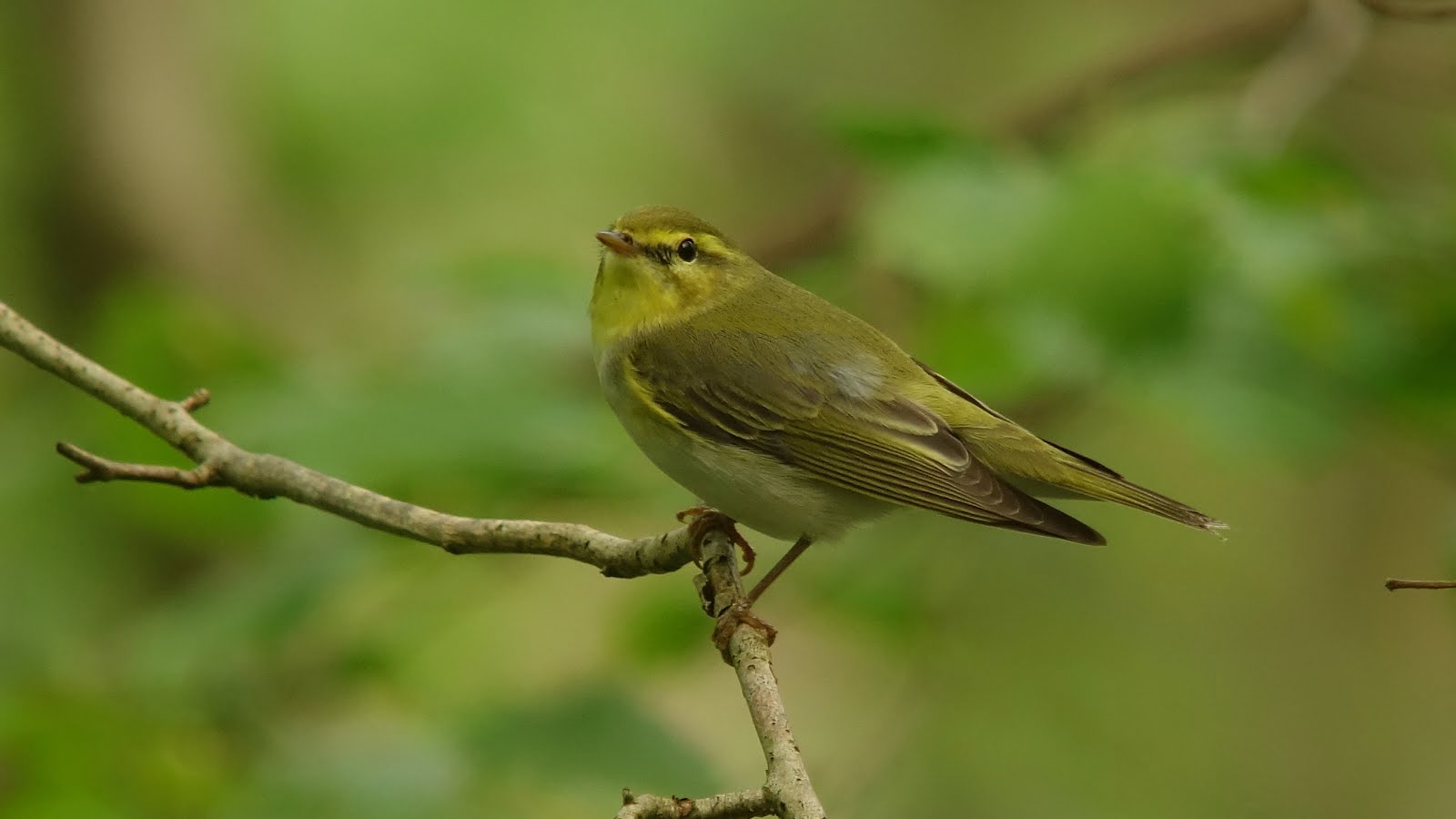 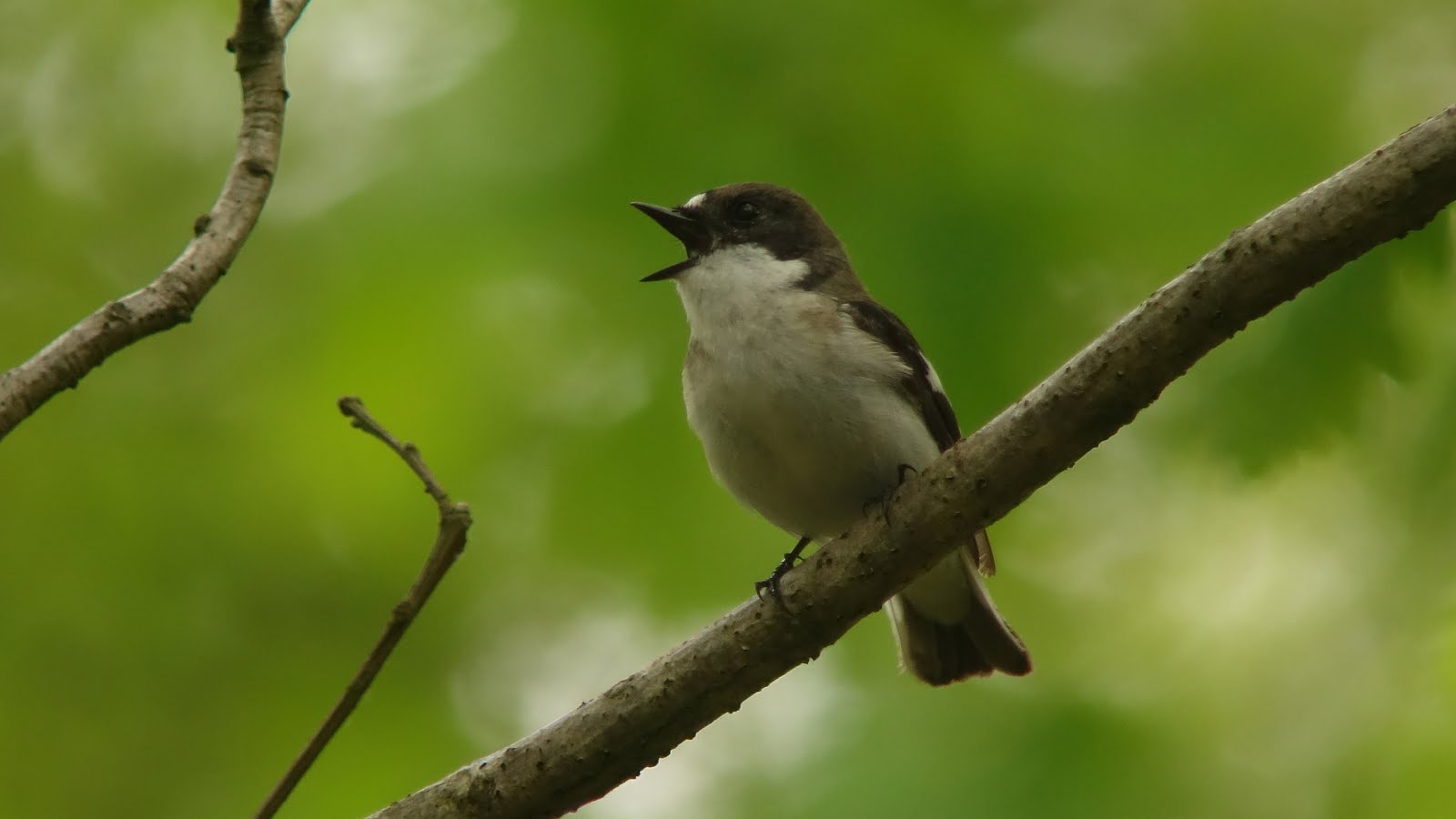 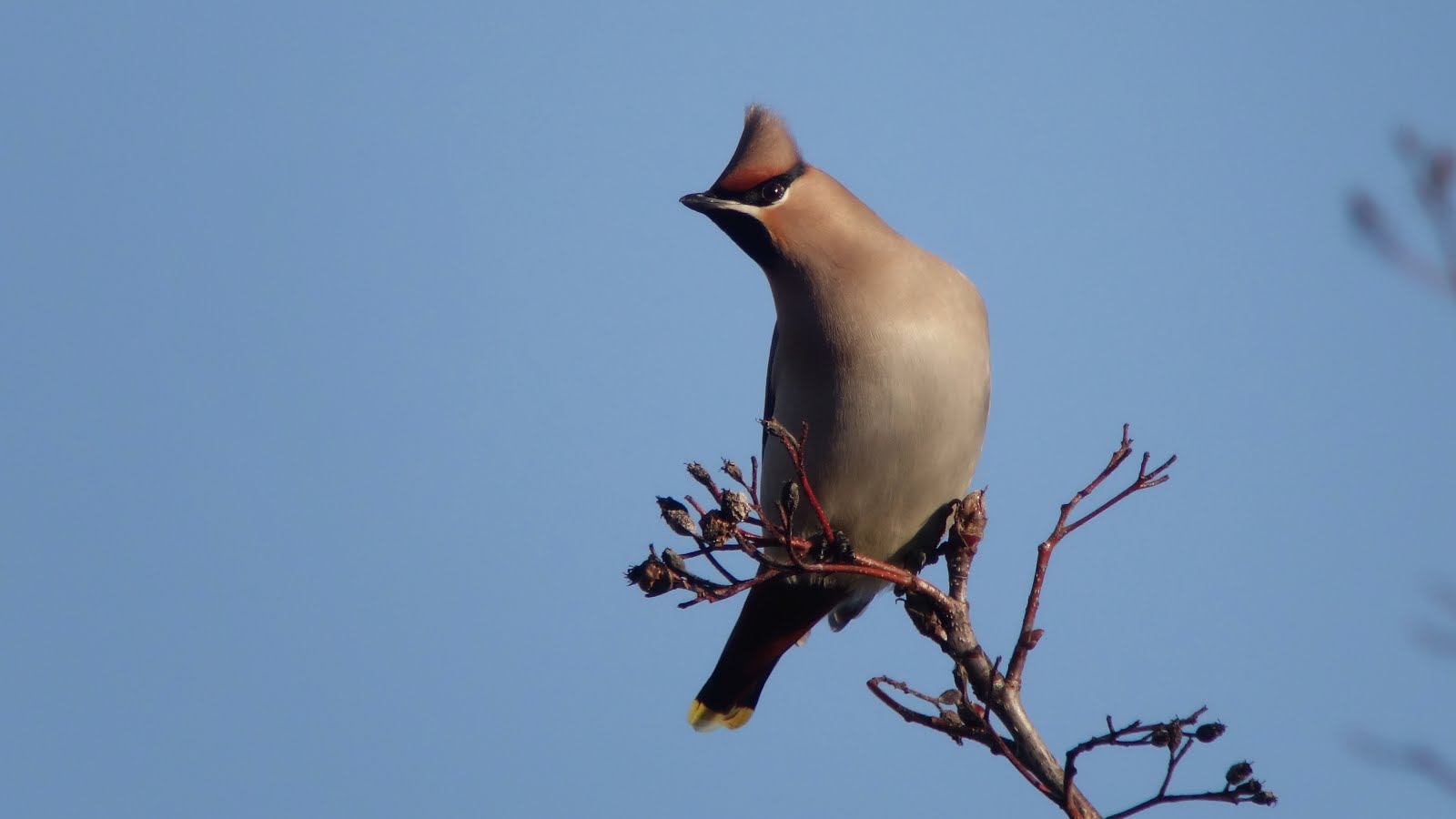 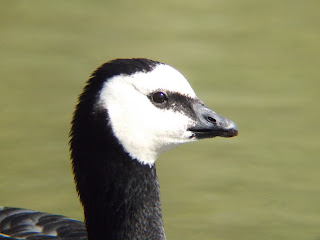